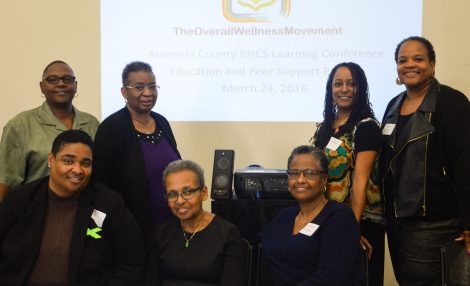 Grant-funded learning projects conducted within various segments of the lesbian, gay, bisexual, transgender, queer, intersex, and two-spirit community to help mental health providers were the focus of a recent conference in the East Bay.

The learning project conference, held March 24 at UC Berkeley, was the latest in a series of three presenting Innovation Grants Program-funded projects that take different approaches toward mental health practices.

“These are learning projects that help mental health providers learn how to serve consumers and clients better, and help the county system learn from their strategies and projects,” ACBHCS Innovation Grants coordinator Linda Leung Flores told the Bay Area Reporter. “Alameda County is so diverse, and we’re always looking for ways to improve our services. The LGBT population in particular is growing and so are the needs, and we need to include more culturally-specific ways to serve this group of people.”

The 26 projects highlighted at the conference – attended by 200 people – were geared toward two target populations: isolated adult and older adult consumers and their families, and LGBTQI2S clients and consumers.

The LGBTQI2S project grantees ranged from LGBT-specific service providers to general mental health organizations. With the goal of developing an innovative tool that ACBHCS and other providers can apply toward more culturally competent LGBTQI2S-affirmative care, each project focused on either a welcoming toolkit, program design, or training curriculum.

Present on the panel was Leslie Ewing, executive director of the Pacific Center for Human Growth, a Berkeley-based LGBT mental health care provider and community center that received an Innovation grant for the project: ACBHCS Welcoming Toolkit Update.

“Alameda County’s welcoming toolkit is a document that’s half procedure and half policy for staff people and providers to use when they greet and welcome people from a vast intersection of communities,” Ewing told the B.A.R. “And there hasn’t been an LGBT component to it.”

Based on the project’s findings, recommendations made to ACBHCS included allowing clients and consumers to choose their personal pronouns and preferred name, having on-hand comprehensive resource lists for LGBTQI2S micro-populations, and installing gender-neutral bathrooms in facilities serving the public.

“We wanted to ask if it really fit for the community,” Haggins told the B.A.R. “We know that an awareness of populations of color that are also of low socioeconomic status is something that’s important to the LGBTQ population in particular. That’s one thing [ACBHCS] wants to be thinking about.”

The project used a collaborative of five Alameda County churches with congregations that are primarily African-American, LGBTQI2S-affirming, and “radically-inclusive of all identities,” Haggins said, “which means some of their leadership identifies as LGBTQ.”

Through field testing and focus groups conducted both in and outside religious settings, the churches gathered information used to make recommendations to the current ACBHCS welcoming toolkit.

Recommendations produced by the project included making multi-gender identity, multicultural, and multi-age images visible to clients and consumers; having clinicians who are skilled in navigating the complexity of LGBTQI2S identity and spirituality/religion available; and employing homophobia-free security guards.

After the panel, attendees broke out into groups to attend workshops held by grantees with projects centered around training curricula and program designs.

With nearly 20 years of experience training mental health care professionals, it’s no surprise the Pacific Center secured three additional Innovation grants around that skill, and presented those projects during the conference’s workshop segment.

“The idea,” Ewing said, “is that these projects will soon be in the public domain and other agencies and organizations can adapt or change them how they see fit.”

To complete the three projects, the Pacific Center worked with 22 other organizations that also work with LGBT-identified people. During the process, Ewing said, the information exchange was mutually beneficial.

“We learned just as much or more than we taught,” she said. “There was also some racial, ethnic, and class-based core work that came out of this. Sitting at the table and working things out was a very good experience for us.”

Ewing, who is also chairperson of the ACBHCS’s Pride Committee, an all-volunteer group of providers that meet to discuss improvements in responding to the county’s LGBTIQQ2S needs, hopes the county will continue its receptiveness to new strategies.

“There’s a familiarity with the work we’re doing that’s not fear-based anymore,” Ewing said. “We’re learning to speak each other’s languages. It’s our hope that we’ll be a part of implementing some of this with Alameda County down the road.”

The four Innovation grants secured by the Pacific Center brought in $400,000 for the organization.

The “O-Well” project used the same ministries involved in the CIBHS welcoming toolkit project and was geared toward reducing stigma associated with mental illness and creating adequate peer support resources for LGBTQI2S people and their families.

An outcome of the O-Well project was a set of program curricula consisting of various peer and congregation training and support components for people doing community work with LGBTQI2S individuals, primarily of color, with mental health issues.

Two de-stigmatization training programs were created: Mental Health First Aid and Wellness Recovery Action Planning, or WRAP, which were applied within the churches’ own congregations and the larger community.

“The idea for the Mental Health First Aid training is to spread knowledge about mental health and how to take care of yourself,” Haggins said. “For WRAP, we got the folks out there doing the work and service strengthened in their own mental health because you can’t serve if your well is dry.”

Between the two Innovations grants, CIBHS secured just over $136,000.

Community Health for Asian Americans, a Bay Area mental health provider, was another organization awarded an Innovation grant for a project that presented an innovative program design during the conference’s workshop segment.

The project, “Oyate Tupu’anga: Healing Indigenous Two Spirit and Takataapui Communities,” documents the community organizing and cultural work Bay Area LGBTQI2S Pacific Islanders and Native Americans having already been doing with each other. 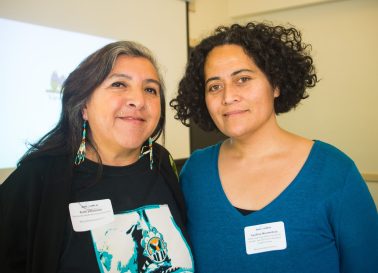 “We learn to pray in our own native languages,” Loa Niumeitolu, CHAA Pacific Islander community health advocate, told the B.A.R., “or pray in English in a way that calls in the ancestors and uses indigenous knowledge because a lot of us don’t have that anymore.”

The group’s other important practices included songs, chants, drumming, gathering around food, relearning the roles that LGBTQI2S people have traditionally held in Pacific Islander and Native American communities, and taking those practices to outlying community gatherings.

The two communities have a long-standing working relationship with one another in the Bay Area that’s based on supporting each other in activist initiatives. Pacific Islanders and Native Americans also share similar traditional values, historical traumas, and present day community challenges like high incarceration, infant mortality, addiction, and teen pregnancy rates.

“Pacific Islanders have been forced out of our own lands to come here to Turtle Island,” Niumeitolu said, referring to the term for North America that some indigenous groups use. “The native people here have also lost land. As native people of our own land, we’re able to recognize how Native Americans honor their land. That’s something we respect because it’s a value we were taught back home. Reaching out to the people of this land to learn and move forward makes us happy because that’s what we want back home – self-determination and sovereignty.”

Other Innovations grantees included Asian Community Mental Health Services, Lavender Seniors of the East Bay, Our Space LGBTQ Center, Horizon Services (doing business as) Project Eden, and Seneca Family of Agencies, all of which presented their projects at the LGBTQI2S mental health conference.