The event, which took place on November 3, introduced the new program geared towards the elevation of women of color within NCLR’s work through cultivating new and strengthening existing relationships with donors who identify as such. Around 50 people, mostly women of color, attended. 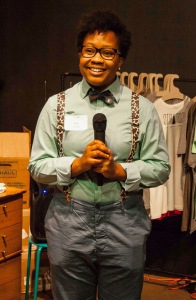 NCLR major gifts officer Ace Portis, the impetus behind the project, is adamant about ensuring that NCLR’s donor base reflects the communities the organization has historically served and continues to protect through its legal and advocacy work. Portis identifies as a blacklesbian, one word, stating her racial identity and sexual orientation are informed by each other. Intersectionally-identified, Portis is a staunch proponent of NCLR’s work.

“Since our beginning, we’ve operated through a feminist, racial justice lens,” Portis told the Bay Area Reporter. “As the LGBT movement evolves, we want people to know we’ve been doing this work for years and we’re going to continue doing it. This is about activating and elevating the voices of women of color and making sure people know we’re as intentional about this group of people as we are about anybody else.”

It was perfect then, Portis said, for Show & Tell Concept Shop to host the event. Located in the heart of downtown Oakland, historically a community of color, Show & Tell is a small retail business but also a community space largely used for events that cater to LGBTQ people of color.

“It was a huge honor for NCLR to host their event here,” Show & Tell owner Alyah Baker told the B.A.R. “It demonstrated that, even though they’re a national organization, NCLR is tuned-in to what’s happening on a local community level, and committed to incorporating underrepresented groups into their national agenda. As queer women of color, we often feel invisible. This recognition is extremely validating, and I’m glad that NCLR recognizes the QTPOC [queer, transgender, people of color] community as vital to their work.”

In addition to announcing the giving circle, the event was intended to introduce NCLR to communities with limited or no knowledge of the nonprofit’s multifaceted work. To acquaint attendees with the organization and newest project, NCLR Executive Director Kate Kendell opened the gathering.

“We’ve seen an enormous change in the place of LGBT people in this culture,” Kendell said, “but we know not everyone is feeling that. And the folks most likely not feeling that are women and men of color, those who live in rural areas, who live in really difficult, corrosive, homophobic, and racist states. Those are the folks we’re going to be there for.

“Our goal for this event is to raise the voice, visibility, and involvement of women of color as donors, those who support NCLR,” Kendell continued. “We have clients who are wildly diverse, we have a staff and board that’s diverse, that represents in a pretty muscular way the vibrancy and diversity of the LGBT community. But that’s not reflected in those who support the organization. [Contributions] are an investment, a way to tell us what we need to be thinking about, how you want to be heard.” 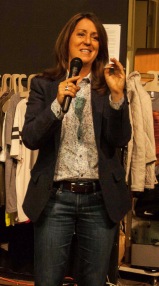 Following Kendell’s remarks, three women of color with NCLR ties spoke on behalf of the organization’s track record. NCLR family law director Cathy Sakimura detailed an NCLR program she started in 2006 to improve services to low-income families and families of color. Additionally, she said NCLR targets issues often overlooked by the rest of the LGBT movement and media.

NCLR board member Lisa Cisneros spoke about her 10-year commitment to the agency’s work. Years ago, she started at NCLR as a law clerk. After finishing law school, she joined California Rural Legal Assistance, a nonprofit legal services program that provides low-income rural Californians with legal assistance. Once there, Cisneros initiated a partnership between CRLA and NCLR aimed at making equality a reality for LGBT families in rural areas.

Ruth McFarlane, NCLR board member and director of programs at the San Francisco LGBT Community Center, was last to speak. McFarlane talked about the importance of participation for women of color.

“This is an opportunity for some of us who don’t always get heard to group together and do things our way,” McFarlane said. “We don’t necessarily do things the same way as everybody else, we do things with our crew. This is an opportunity to show up for NCLR with your crew, whoever they are, no matter how much or little they may have, and engage in work that is not just for you, but about you, to have your voice be heard.”

Ellis, the giving circle’s namesake, is credited with being the oldest-known living lesbian before her death in 2000 at the age of 101 in Detroit. Ellis, a working class African American, opened up her home to LGBT community members in need. She was also one of the first women in Michigan to own her own printing business, which she also operated out of her home.

To donate to the Ruth Ellis Women of Color Giving Circle, visit www.nclrights.org/donate or contact Ace Portis at aportis@nclrights.org.