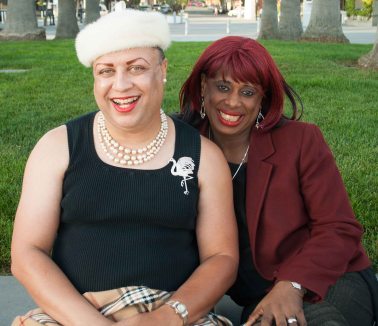 Brianna “Breezy” Golden-Farr and Elizabeth Howard are spearheading an unprecedented project that addresses the absence of emergency shelter housing for transgender women in Oakland. Called Queens Cottage Shelter, or QCS, the housing initiative, while still in its beginning stages, is quickly establishing a foundation that the project’s team, supporters, and community are hopeful about.

In partnership with Transitions House, a local transgender housing advocacy group, QCS created an Indiegogo campaign last month to raise start-up funds. Clair Farley, Transitions House co-founder and associate director of economic development at the San Francisco LGBT Community Center, was able to leverage her social media aptitude for the project and within one week of going live, the campaign had surpassed the $5,000 goal.

“The need for Queens Cottage has been demonstrated by the over 350 individual donors that have come together thus far to support this campaign,” Farley, 31, a longtime trans advocate, said. “By starting in Oakland, we’re starting with the folks most impacted by violence and discrimination. Trans women of color are six times more likely to be unemployed or underemployed. Queens Cottage speaks to why housing our community is important, to get people out of the street economy and provide access to other employment and education.”

At press time, the campaign had raised $9,475 with 22 days left to fundraise and there’s one thing Golden-Farr, Howard, and Farley are sure about – QCS is going to need more.

“We set the initial goal low to make sure we’d reach it,” Golden-Farr, 48, an African American transwoman and QCS founder, said. “We have an idea about what our start-up and operating costs will be and our priority right now is to raise as much money as possible. Our next steps depend on how much we’ve raised.”

Howard, QCS chief executive officer, agreed, saying they’ve applied for tax-exempt status, started developing a board for the organization, and are looking into a business license for the shelter’s future residence.

“It’s all very expensive just to open the doors and get people off the streets,” said Howard, 50, a mixed-race transgender woman. “You wouldn’t think it would be so hard but it is, so we’re really trying to broaden the campaign’s reach.”

While QCS isn’t the be-all, end-all solution to homelessness among transwomen in Oakland, it scratches the surface of a larger issue. To date, there are no trans-specific housing shelters in the Bay Area. While a few organizations in San Francisco work to be trans-inclusive, gender-affirming shelter spaces created exclusively for trans people in the Bay Area don’t exist.

“Walden House has a program for folks in recovery and Larkin Street Youth Services has some accessibility for LGBTQ youth but those systems aren’t specifically tailored to the trans community,” Farley said. “There’s nothing else.”

Golden-Farr can speak firsthand to the immediate need for trans-specific housing. When, at the end of last year, she found herself homeless after an unsteady living situation collapsed, she went to Bay Area Community Services, an Oakland-based vulnerable adult services agency, to seek transitional housing.

“When I walked in,” Golden-Farr said, “they didn’t know what to do with me. Luckily, I had other options but if I didn’t, which many girls don’t, I would’ve been in a world of trouble. There would’ve been no place for me to feel safe and comfortable because they couldn’t figure out where to put me, on the men’s or women’s side.”

But two months later, after “resorting to the oldest profession in the world” to pay her weekly rent at a downtown Oakland hotel, Golden-Farr approached BACS a second time. After explaining to the agency that she was experiencing panic attacks caused by anxiety around entering the shelter system, BACS moved her to a separated space away from other shelter residents.

“If it wasn’t for that program,” Golden-Farr said, “I don’t know what would’ve happened to me. That moment, I vowed to do everything in my power to ensure that the next trans woman wouldn’t have to go through that because it’s not right. There’s no reason a girl like me shouldn’t have a safe and comfortable place to lay her head at night.

“And,” she added, “if I was going through this I can’t imagine what other girls are going through, who may be strung out on drugs, HIV-positive, have no family, absolutely nothing.”

“I know Breezy well,” Almanza said, “and I fully support her mission both personally and professionally to create a transgender-safe environment for the homeless. There is a huge need amidst all social services to create safe, discrimination-free environments that are welcoming across genders. We’re supportive of Breezy and hope to collaborate with her organization to get it off the ground and do whatever we can to help her be successful in meeting the needs of that specific population.”

The QCS team intends for the shelter to be a starting point for transwomen to gain stability and access to skills, resources, and health care in a safe and affirming environment. Golden-Farr and Howard foresee space for 10 residents initially, each with case workers, and a van to provide transportation to the shelter.

“The girls working out on MLK [Jr. Way in Oakland] are already talking about it,” Golden-Farr said. “Some are 13, 14-years-old, others barely 20, 21. They’re saying, ‘QCS is coming and we’re going to have a place to go,’ which means no more sleeping in the doorway of a church.”

When asked why something like QCS hasn’t existed before, Golden-Farr and Howard, friends for 31 years, explained that transwomen, especially transwomen of color, exist on society’s periphery.

“It seems to me,” Howard said, “there are certain categories or subgroups that are in a queue waiting for their cause to be pushed forward. The homeless transgender is at the bottom of the list, if on the list at all.”

The QCS team plans to continue increasing visibility around the project. Video vignettes of transwomen sharing their stories will be posted on the QCS Indiegogo page and Transitions: A Residence for the Trans Community Facebook page within the next week. Additionally, Golden-Farr and Howard will be featured on a KOFY TV20-Cable 713 segment (airing Sunday, May 25 at 9:30 p.m.) during which radio personality Michelle Meow interviews them about the importance of QCS.